Now, China is being demanded answers about an athlete who went missing after accusing a Communist Party big wig of sexual harassment. The UN wants to know her whereabouts.

It won’t matter how China responds. If the Confucian Communists running China give the UN a satisfactory answer, then CCP would have just given in to international demands. That’s not something that the Chinese’s cocktail of crazy would do under normal circumstances. If China does actually give a satisfactory answer, it will build a mentally-destabilizing resentment deep within China’s leadership.

Either way, China feels backed into a corner.

Then, Taiwan flaunts ever-growing stronger ties with the States. Newly upgraded F-16s were commissioned this week, and both governments keep calling for more relations. That’s not out of the question because Taiwan just opened its office in Lithuania, an office named for “Taiwan” instead of the usual “Taipei”.

So, during all the great friendship happening between Taiwan and the rest of the world, not only is China uninvited; China is given a summons by the UN begging questions of sexual harassment and possibly murder.

Taiwan has become the center of China’s conflict with the world. One economy at a time, one government at a time, China has managed to insult the world. The Chinese have done such a good job of losing friends and alienating voters of foreign countries, not even Russia can afford the political cost of siding with China, not even to manipulate China behind a mask of feigned friendship. Don’t expect Moscow to take center-stage at China’s aid quite yet.

While the world hates China more and more every day, that hatred finds a way to express itself in love for Taiwan. Taiwan is now the grand alternative! Taiwan is the adorable poster puppy everyone should have sided with from the beginning. Taiwan needs military help, but most of all sympathy, compassion, and understanding, perhaps even grandstanding. Nothing sends the message that a nation is fed up with China like siding with adorable, cuddly Taiwan, especially on the most trivial things like medical masks or forcing Taiwan to call its team “Chinese [what the heck] Taipei” at the Olympics. Trivial things, after all, are what China loves to claim as some of the greatest threats to Communist-controlled national security.

It’s almost to the level of being an election tactic in Western democracies. Do or say something that couldn’t even hurt a fly, then China squeaks and bellows and throws such a fuss, voters love whichever politician China hates. Nothing is as adorable and benign as kindness toward Taiwan. So, that’s the story of how Taiwan became the world’s new favorite.

China Says It Will Act If U.S. Persists on WeChat, TikTok Ban // Bloomberg

As Europe’s China scepticism grows, a glimmer of hope for Taiwan // Aljazeera

If North Korea heeds China's urges to back down on its nuclear program, it would be a welcome first. China requested the US back down its military activity in South Korea. Russia does not want North Korea's economy to become worse. Much has been claimed about the purported, will-be effectiveness of new UN sanctions against North Korea, but history provides little to no basis that North Korea heeds any warnings or follows any step toward deescalation.

Though historically bleak, this effort from the international community is the best well-mounted push for peace ever seen for the Korean situation. Even Taiwan is urging North Korea to back off. While this may set the stage for some kind of "breakthrough" in negotiations, the bigger and less-acknowledged stage being set is war. With the best-made good-will effort having been made to stop North Korea's nuke program, one missile launch would prove all the yea-sayers wrong. That threat could wake up North Korea to climb down out of the tree—the hidden threat of war that every peaceful stance veils.

Any peace offering indeed doubles as a hidden war threat by definition. But, fools don't believe in what they can't see. So, we'll see.

Remember, though, how fools surrender: in childlike tears.

If North Korea fires even one more missile, buckle up and grab the popcorn for an immanent Trump "it didn't work, so now we will" speech. If that happens, not only will North Korea's position be untenable, but so will it be for everyone who claimed that negotiations would stop the missile launches.

In these tense times, China is making no new friends. Old border disputes with India are rehashing and ramping up. The VPN crackdown makes sense since no government should be circumvented, the most-ignored question is whether there should be a need in the first place. There are numerous reports of Chinese students being denied travel documents to study at universities in Taiwan. Of particular interest is National Cheng Kung University in Tainan. Tainan's Mayor, William Lai is the most popular of any and in the same semi-pro-independence party, DPP, as Taiwan's president. And, Tainan's small airport was used by the US in the Vietnam war. Other than that, there's little to explain why the third-top school seems to be a top target for denied travel from China.

With stronger rhetoric about military and not letting any China-claimed land go, with action concerning Taiwan, and militarized border crossings with India, it is clear that China intends to take a lead role in conflict on multiple fronts. All depending on how things develop in the Korea situation, China could face a clear third front.

END_OF_DOCUMENT_TOKEN_TO_BE_REPLACED

There really isn’t much news this week in the Pacific. China and Russia practice war games in the disputed South Sea while the US and South Korea practice their war games near the Korean Peninsula. Taiwan’s government continues what is expected of the new regime: Status quo, strength, and corruption crackdowns—two of which don’t exactly please China.

Status quo is exactly what China will not accept. Taiwan and the US object to the objection to status quo. No big chances are coming from the countries China opposes. China is determined to break the mood. Beijing sees the West as “already having” upset status quo and want to revert to history—well, a specific part of history anyway. So, “status quo” has become a relative term, as has “perp”. We’ll have to leave conclusions in the hands of the people.

That conclusion may be soon as much as it may be well-informed. The world slowly becomes more and more aware of what is happening in the South Sea. When someone busts a move to make headlines, there won’t be any surprises.

END_OF_DOCUMENT_TOKEN_TO_BE_REPLACED 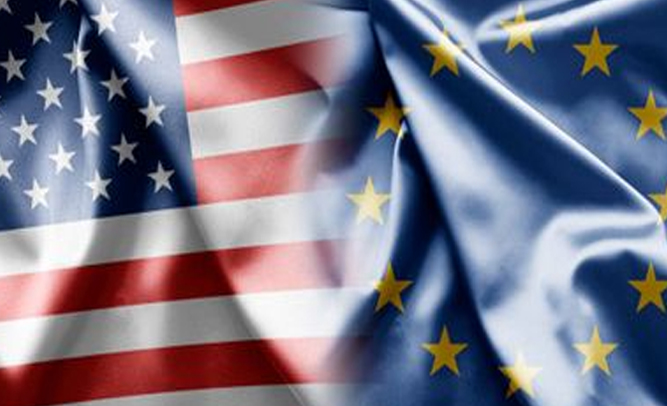 Britain’s stunning vote to leave the European Union is both historic and world-changing, but what does it really mean for Americans living on the other side of the Atlantic? Potentially, everything — the economy, national security, even the race for president will be affected.

Some Americans are now demanding that the United States follow suit and leave the EU.

Long distance trucker and self-proclaimed patriot, George Holt, says that Americans need to be independent from the rest of the world. “I been driving back and forth cross America for nearly 20 years, and I’m telling you things have changed. We need to be our own nation and stop all these damn Mexicans and Muslims from coming here to live off my tax dollars. If we leave the EU, our borders will be secure and our land will be ours again.”

Disability recipient, Janet Hagelund says America should leave the EU immediately. “Did you know the United States is required to pay a tax to them? And they want to control everything. More people should educate themselves about what really is going on…Plus they’re a bunch of socialists.”

When Hagelund was asked if she meant the UN, not the European Union, she admitted she had been mistaken. “Yeah, them guys,” said Hagelund.

Video viral: “Number one: Get a gun. Buy one legally. Learn how to shoot. And be primed to use it.” (FNC)

Climate Deniers to be expelled from UN (Climate Depot)

Predicting prices, background: OPEC is suffering because it miscalculated–but so has everyone else (QZ)  · · · →

Carson’s the only one going up in polls

…Philly too? …Letters to Philly.com

Fiorina’s HP earned Millions from sales in Iran during sanctions

Russia to take on ISIS

Damon: Actors, stay in the closet, keep many secrets to help your career

Vladimir rolls tank parade, loses control of spacecraft. US Navy stops accompanying commercial ships in Strait of Hormuz, still present. Yemen calls on UN. Jerusalem has itself together after elections. Tesla is taking off, up 4%, ahead of schedule. Dengue: the new outbreak panic headline—Mutant ‘GMO’ mosquitoes to save the day. Comic relief: Shaq is too big for the studio  · · · →