The pope is no fool. The Vatican knows to listen to a Hong Kong bishop concerning China. The deal is hotly debated in the Church and by no means unanimously supported as motherhood or apple pie. If the Vatican goes through with this controversial deal with China, then it indicates that the Vatican is counting on a popularity war against China, in which China loses respect, both among Catholics in China and everyone in every economy everywhere else in the world, except of course among Russians who always like a good fight.

If war breaks out between the West and China, and if China loses to a fierce West, China ought hold the Vatican partially responsible for playing the complex popularity mind game which is this deal. This agreement was always a cloaked plan to harm China. It seems that the retired bishop in Hong Kong hasn't figured that out.

The Vatican would have us believe that they haven't figured out China when they actually have things figured out all to well. That's what makes the Vatican arguably the greatest danger to China. No wonder China is so concerned, but still not concerned enough.

Equally concerning, Taiwan is seriously talking about moving their Legislative Yuan and their Executive Yuan offices with it. The new location would be Taichung, the center of Taiwan. That would put the central government seat in two locations and the frequent target of democratic demonstrations between the ideologically conflicted north and south. While this is purported to help connect the central government more closely to local governments—and to provide large, open plazas so that demonstrations don't interrupt local commerce—and to provide for an "earthquake" not disrupting the entire central government, that word "earthquake" carries symbolic meaning without mention. A change of cartography will also date any invasion rehearsals.

More than implicating an airborne "earthquake" from, say, China, promoting democracy demonstrations along with a united island of 23 million are the greater, yet more subtle, messages that may insult some offices on the other side of that Taiwan strait. Few in the West will understand how Taiwan's central government creating a "second seat" could spark the war that the Vatican is already piping the popularity to fuel.

Just as much, there are those who do and do not understand North Korea.  Every time the West is shown media coverage of North Korea, journalistic commentary doesn't know what to say. Look at them, they all clap in unison. Doesn't it look strange? They can't be happy; after all they never stop smiling. It's all fake. And, look at all of the crying at the Kim Jong Il funeral. That's either fake or it's radical support.

The press, wholly unqualified to explain events in Far East Asia, can't help but flaunt their own ignorance.

North Koreans are part of a tightly-controlled, cult-like, nannied-and-mommied play script. They are neither happy nor sad. They are caught in a culture of mass group think. They cry at a Kim funeral because that's what you do, much like taking your shoes off at the door. They cheer in choreographed unison at a sports arena because that's what you do at sports arenas and, more importantly, all cheering is choreographed anyway, right?

They aren't cheering from any obligation. They're like a bunch of Sunday Morning micro-church minions parroting their microcosm lingo because that's the only thing they have ever learned to do. A similar comparison would be to tone-lexical native language speakers—such as Cantonese and Mandarin—trying to use the free-form tone flow of Romance sentences, or asking someone who only reads sheet music to improvise for the first time ever. Singing spontaneously from the heart just isn't something they have ever known. And, all the Western press can do is gawk, but not understand.

It just shows how far we still have to go to get to know each other.

END_OF_DOCUMENT_TOKEN_TO_BE_REPLACED

Writing about China is difficult. On one side there is the Western push toward the false narrative that "all things China are bad", then on the other side pulls gravity from an invisible black hole gobbling up the truth. China is a yeah-boo, more yeah and more boo than most other countries. Anyone expecting a narrative—West or East—while reading the truth about China might instinctively think that the truth supports "the other side".

But, Symphony doesn't take that stance. China is just China. It makes wise moves, it makes foolish moves, just like every other nation on Earth.

This week was a week of economics. China is cracking down on cryptocurrency—just as it cracks down on anything it can't control with externally-applied force. The cryptocurrency market in China is fleeing from the crackdown. Yet, China is reaching out to Europe and Britain.

Just how control is driving away cryptocurrency, so will Sino-Vatico control drive the underground farther underground. Like jell-o in the hand, tightening the grip makes them slip through the fingers. A better solution would have been, more or less, status quo: Let China keep doing whatever they want and let the Vatican excommunicate whomever they want. But, the Vatican knows that would be the better solution. Does China know that the Vatican knows?

Any kind of agreement between the Vatican and China is pointless since China doesn't plan to ever compromise anyway, especially on the Vatican's human rights agenda as well as Taiwan. In the end, Catholics worldwide will hate China more. China should avoid all talks with the Vatican because any Westerner can foresee that it will only reap ill will in the West. Perhaps that is the Vatican's deeper agenda in "making a deal with the dragon", as it were. If China is the tiger then the Vatican is the monkey; the tiger has been warned.

China making infrastructure and economic inroads to Europe, is a good thing, but not on most levels people consider. Firstly, it is an indication that China feels a squeeze from the US and is looking for new trading partners. Secondly, it will cause the Westernization of China more quickly. Europe and Britain don't like dishonesty. Many of the dishonest practices Chinese businessmen are notorious for—which the Communists are cracking down on for the record—won't be tolerated. In terms of "ethics", China will have to Westernize in order to do business with the West. Perhaps that is why Beijing is pushing it—to help with the crackdown.

The second matter is more militarily strategic. To governments, all infrastructure is military infrastructure. If China has a roadway into Europe, that is a roadway that can be used by an army—in either direction. So, finances between China and Europe carry two approaching stigmas: 1. China's power is morphing into economics and 2. China is laying-in wartime infrastructure.

Changing to an economic power will weaken China's ability to use military force. Taiwan is making economic power moves of its own by positioning itself to become an AI development hub for the world—which China's customers could likely be dependent on if they aren't already. No one wants to drop bombs on customers, yet China is busily making both.

These economic relations will "tame the dragon", as it were, which may not be what China wants. Secondly, Europe is inviting China to become a stronger military power in their own back yard. China is no traitor, but nor are the Chinese loyal to anyone but the Chinese. Russia should try to halt China's relations with Europe for Russia's own good. Believe it or not, China may hold Russia in check before this is all over. Making inroads for China might be Europe's salvation in decades to come.

END_OF_DOCUMENT_TOKEN_TO_BE_REPLACED

Originally, both questions of marriage began in the West. Same-sex marriage is about to become legal in Taiwan. And, the Pope is about to strike a deal with Communist China.

A Bishop in Hong Kong, among others, objects to an agreement between the Chinese government and the Vatican because it would allow Beijing to vet Bishops how Beijing vets Hong Kong politicians. The results among Catholics might mirror the results among Hong Kongers. Interestingly, that bishop in Hong Kong already falls within the jurisdiction of both Beijing and the Vatican, just as much as he objects to both finding a union. Either he is incredibly insightful of both or incredibly foolish to make enemies with his unified superiors.

Bloomberg is focused on China’s military-based space expeditions. The thinkers think that China should teach Trump how to make America export again. Today, 10,000 people congregated outside Taiwan’s legislature in support of a law to recognize same-sex marriage, and the West barely noticed.

END_OF_DOCUMENT_TOKEN_TO_BE_REPLACED 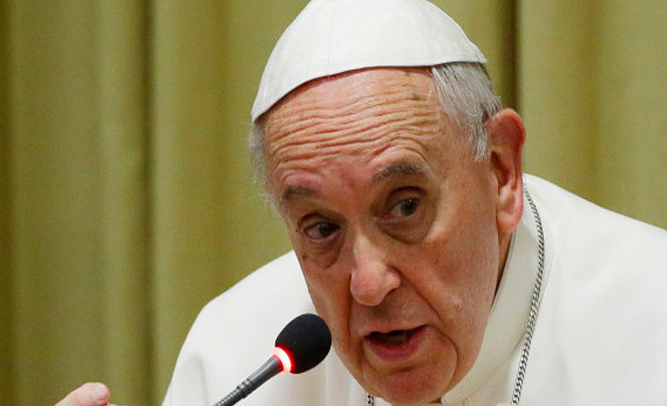 Pope Francis says that the world-wide phenomenon that is Pokemon Go is really a Devil’s tool to bring children and teens over to the “dark side” of Satan.

“Games that progress the mind are a wonderful tool to God,” said Francis. “Some games, though, were created by The Devil himself, to lure unsuspecting souls to a darker place. Pokemon Go is, I believe, the most Satanic game in history.”

Francis says that the reason that the game is so popular is that technology has replaced actual friendships, but that the exercise that children are getting as they walk around, looking for digital creatures, is only going to lead to destruction.

“Yes, children are leaving their homes, they are being active, but they are not paying attention to their surroundings, and soon they will be snatched by predators who want to touch them, and hurt them,” said Francis. “I myself was almost hit by a car while trying to catch a Mr. Mime, and that was when I knew that this game was going to be the end of civilization as we know it.”