Every time there's a shooting, everyone uses emotion to say everyone was right and everyone else was wrong. "More killing, so all the rest of you should agree with my politics, dah!" It started with attitude. Mass shootings only indicate an already-divided country. People either demand guns everywhere or guns denied or some combination thereof; no one argues in favor of training the militia.

The Second Amendment guaranteed the right for all to own and carry firearms because all were obligated to be trained in the militia. Liberals want none of it and so-called Conservatives want the arms with not a single word about militia training for all. But, militia training for all citizens would solve the problem, both the attitudes of potential shooters and the readiness of the general public. People with "mental problems" wouldn't be allowed in the militia and thereby wouldn't be able to own firearms. Denying weapons to the insane and unstable in that way would calm concerns of the Right.

The Right is concerned that the Left wants to force the Right to behave like they are part of the Left. With recent laws that punish people for not agreeing to LGBTQAYKXYZYTBA speech patterns, who can blame them? With Universal Studios' The Hunt even having been filmed, who can blame the Right for feeling the need for self-defense? Still, we don't need massive gun ownership without training; we need the militia for all people. The militia is what the Right-Wing's precious Constitution calls for, but the Right-Wing has not. So, their fear of the Left, however justified, is well-earned.

Even in a Liberal utopia where everyone is filled with hatred, while all means of acting on such hatred have been removed, no one would be safe without public-wide training. The whole public needs to be trained to deal with every dangerous scenario, from a dictator's takeover to an invasion to a mass shooting. It's called the "militia" and it's the one thing neither extremist nor moderate of our polarized political spectrum even peeps about.

END_OF_DOCUMENT_TOKEN_TO_BE_REPLACED

If we look at help and mutual interests, it would seem that the NRA is a covert Leftist organization and that anti-gun groups sponsor gun shows.

The best reasons and the best laws for gun owners are also the best-kept secrets, at least in NRA memes and Tweets. Gun owners often say that "gun control" means "hitting your target", but where are the NRA bumper stickers calling for target practice, for high school students to take the Constitutionally required "Militia" course? It doesn't have to be in high school, but high school makes the most sense since both Militia and high school education are performed by the State. By only rallying for guns, guns, yeah, yeah, the NRA seems to be making its own strawman defense for guns—giving the wrong reason for a half-right conclusion. It invites effective opposition.

Either the two groups are in cahoots or they don't really think about the effects of their actions.

Taiwanese young men are required to attend a weekly class in high school as part of mandatory basic military training. After they have been out of school for a certain period of time, they are summoned by their government to report for four weeks of on-sight basic training. Their society does not have any guns in circulation, except the police, of course, and what unproven political-mafia machines might allow into the hands of "enforcers", but that's a different story. Taiwan's society is light years safer than American.

The two cultures are very different. The United States has wide, open country where police response time is slower than the second-most densely populated country in the world. But, if basic military training can keep a gun-free society safe, imagine what already Constitutionally-required "Militia" training would do for the USA.

END_OF_DOCUMENT_TOKEN_TO_BE_REPLACED 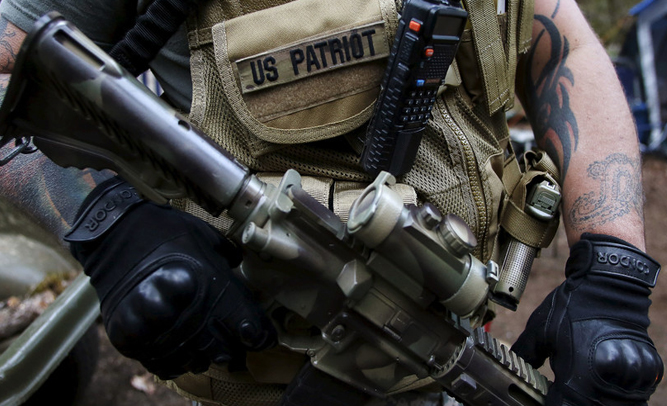 Leaders of the Bundy family have come out on Youtube saying that the plethora of sex toys people were sending would not deter them from their mission of helping families. “We’re not going to let all your hatemail sidetrack us. We’re going to continue to do good for our families and this country.”

Since their video aired, they have received two packages which contained actual human genitals. Although they have taken over a federal building, the post office continues to deliver their mail.

“It’s very creepy for us to get actual human remains in the mail, but it’s more annoying than anything,” said Carl Bundy. “We want to be able to sell the items donated to us, and it’s illegal to sell human body parts. It’s a shame someone would throw away perfectly good penises like this.”

What happens to money after a campaign closes

Video: Obama support not according to the script

FOX: The ‘clock’ was copied?

Pope circled to wait for Obama